I had gone to Spar after work yesterday and though I’d check out any new brand ranges out yet and I actually found a Quest Nutrition Bar (I couldn’t believe it), the Protein Bars I see on big IG profiles and didn’t think I’d find one in SA, but anyway. I decided to take it to work today as a midday snack after the work day actually and now I’ve got something to say haha.

This protein bar is lowest calorie bar of the series at 180 calories and it challenges for the lowest carbs, if not the lowest at 4 g Carbs and I feel that it being the most important part of the bar being it’s protein content at what I’d call “the minimum” at 20 g Protein and with natural flavors and 1 g of sugar means carbs and fat will be low at 6 g – it’s pretty simple protein blend (milk protein isolate and protein isolate) almonds, soluble corn fiber, natural fluids and some sea salt and a little more processed in alkali.

The taste of the protein bar is pretty good, being simple with its chocolate brownie flavour that has no coating and just all around the same taste and texture, which makes it not taste bland but just not creative or as explosive as the Supplements SA Whey Nougat Protein Bar with different tastes blending in one bite.

It is good tasting and with it carrying the “minimum” protein content I’d say is sufficient for muscle repair and recovery at 20 g, that does make it a top protein bar and compares with the Grenade Carb Killas in terms of its high protein/low carb ratio with net carbs at 4 g, good for those who are looking to be on that weight loss, since calories are the lowest of the protein bar review series at 180 kcal.

The Quest Protein Bar goes for R41 at Clicks Pharmacies and I don’t know what other prices you can get them for, but I just saw the price for a 12 pack at R414,54 meaning about R35/bar on the iHerb site I saw this price on.

I think any of these protein bars that go over R30 are really expensive, even over R25 actually. So I’m saying that despite its good quality in simplicity, maybe because it’s an American Brand that’s why it’s a bit pricey, I believe that it would be an occasional buy for me. 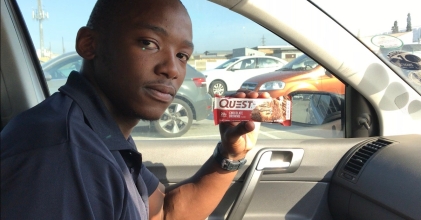 I’m glad I had found another overseas supplement brand which you could try when you’re feeling adventurous. I really appreciate the simplicity of this protein bar with its appearance and ingredients, while being of high quality in its macro content.